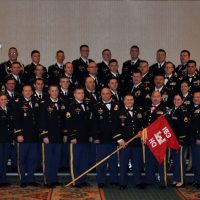 A welcome home ceremony for about 165 Soldiers of the South Dakota Army National Guard’s 153rd Engineer Battalion and its Forward Support Company is scheduled for Saturday, Sept. 30, at 11:30 a.m. at the Huron Arena.

The public is encouraged to attend the event as the Huron and Parkston-based units return from a 10-month deployment to the Middle East.

A community recognition event will also be held for the FSC, Sept. 30, at 4 p.m.  at the Parkston High School auditorium.

The mission of the 153rd while deployed was to provide command and control of assigned or attached engineer units, while the FSC provided logistics and maintenance support.

The Soldiers returned stateside to Fort Bliss, Texas, Sept. 17, where they have been completing demobilization requirements before to returning back to South Dakota.

This deployment marks the second mobilization for the 153rd which deployed to Iraq in support of Operation Iraqi Freedom in 2004-2005. This was the first deployment for the FSC.