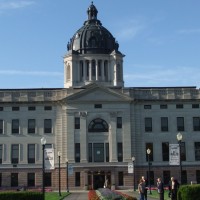 The Senate Ag and Natural Resources committee this morning is set to address a bill extending the sunset clause on a state law dealing with recreational use of non-meandered lakes.

Senator Josh Klumb of Mount Vernon was a member of a committee that helped draft the legislation which was passed last summer during a special legislative session. He feels the law is working and likes the idea of extending the sunset clause to 2021. However, Klumb says the issue is complicated…

He says he’s been told there are several other bills related to the issue that have not yet been published. Klumb says over the last couple of days he’s been contacted by people saying the law isn’t working and he’s not sure where that opposition is coming from.

The committee meets at 10 am in the Capitol.