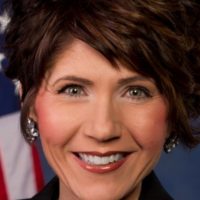 Governor Elect Kristi Noem says the transition has been going well as she prepares to take over for Governor Dennis Daugaard in January.  Speaking at the Charters Of Freedom dedication event Sunday in Clark Noem said her team will be busy this week conducting interviews in Pierre with individuals from the various agencies and departments.

Noem said she’s taking Governor Daugaard up on his offer to shadow him.

Noem also said there’s more work to be done in Washington before finishing up her work as a Congresswoman.