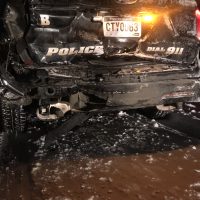 While assisting the Beadle County Sheriff’s Department at the scene of a single car accident Sunday evening, a Huron police officer’s patrol car was struck by another vehicle.

According to the SD Highway Patrol, there was a single vehicle rollover at mile post 124 on SD Highway 37. When Huron police officer, Captain Paul Sides, arrived, he put on his amber lights with the arrows flashing left and parked on the shoulder of the east side of 37 facing northbound.

Around 6:16 pm, the officer was sitting in his vehicle with the driver of the rollover crash when a northbound 1997 Ford F-150 pickup driven by 49 year old Eugene Patenaude, Jr. struck the rear of the patrol car. Patenaude said he saw the amber lights and tried to slow down, but vehicle slid on the ice and snow, crashing into the PD vehicle.

The highway patrol says Sides suffered minor injuries but required no medical attention. Neither the driver from the first crash nor Patenaude were injured.

Both men were wearing seatbelts.

The patrol car and the pickup were both towed.