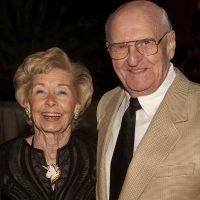 Paul recently celebrated his 90th birthday; he continues to work at Christen Group and live in Huron. Donna passed away on January 6, 2019.

During Mayor Aylward’s presentation of the award he noted, “This year’s recipient, like so many before them, really represent a commitment to making our city better. Their support exemplifies the outstanding efforts by businesses all across this city who are out in the trenches trying to move this community forward. I congratulate them on their many, many successes and I thank them for all of their support and commitment to our community.”

Aylward said that Paul and Donna have always believed in Huron and are proud to have made it their home for nearly 70 years. “Their influence has been far-reaching as they have taught and continue to teach others what it means to give back through hard work and an optimistic point of view.”

Over the years the Christens have been major donors to the Huron Community Development Foundation, the Huron Central Park Project, and multiple economic development campaigns in Huron. Paul continues to respond to the community’s economic needs by serving on numerous committees and task forces.

In addition to many other awards, Paul and Donna received the Outstanding South Dakota Philanthropists of the Year award in 1990, the Distinguished Civic Service award from the Huron Chamber of Commerce in 1991, and were named in The Chronicle of Philanthropy as “The Philanthropy 50: America’s Biggest Donors in 2011”.

However, Aylward said there is much more to Paul & Donna Christen than titles and awards. “These honors have come to Paul and Donna because they lived what they believe,” said Aylward. Christen noted that his success, as well as the success of Huron, is and always will be determined by our attitude. “Our lives are not determined by what happens to us, but by an attitude we bring to life. A positive attitude causes a chain reaction of positive thoughts, events and outcomes. It is a catalyst – a spark that creates extraordinary results,” said Christen.

Paul joined the Boy Scouts in 1941 and in 1943 became an Eagle Scout, followed by many years as a local, regional and national leader. He received the Silver Buffalo Award – the BSA’s highest national honor for distinguished service to youth.

Paul credits his experiences in Scouting for preparing him for success as a business leader, as well saving his life. “The Boy Scouts taught me critical first-aid skills that literally saved my life when I was involved in a near fatal plane accident in 1967,” said Christen. Paul also served in the Naval Reserve from 1947 to 1954.

In 1951, Paul & Donna were married and moved to Huron to make their home and begin their family, having two daughters, Rebecca (Robert) Pohlad and Kathryn (Jim) Ramstad, both of Minneapolis. They have three grandsons, one granddaughter and ten great-grandchildren.

In Huron, they founded a small bakery and catering business which grew to include bake shops in the upper Midwest. In 1962, the Christens expanded into commercial real estate and construction. In the late 1960’s they began ventures that would range from soft drink bottling to international airlines to Las Vegas hotels.

In 1984, Christens became involved in professional baseball when he became a minority owner of the Minnesota Twins. In the late 1990’s and 2000’s they moved into the community banking business and owned eighteen First Western Bank locations in western South Dakota. In January 2008, they sold their banking interests.

They both served on numerous local and state boards and foundations. Together they established the Christen Hohm Lusk Greater Huron Area Foundation in 1988. This area foundation was established to respond to the financial needs of the greater Huron area, providing millions of dollars of funding for economic development, community improvement, arts, sports, civic, school, and church projects in Huron.

Aylward noted that the Christens have been very philanthropic to Huron and the state of South Dakota throughout their life. The Christens gifted millions to Dakota Wesleyan University as a scholarship endowment. Later they gave support for the preservation of Mount Rushmore and the Crazy Horse Memorial, to DWU for the building of the Donna Starr Christen College of Healthcare, Fitness and Sciences facility, and again to DWU to help build a new Wellness Center on the campus.

The Christens were founders and served for years on the SD Community Foundation Board of Directors, where they donated over $25 million to this organization that administers approximately $350 million in assets for more than 850 endowed funds and distributes grant funds to various projects and non-profit organizations each year.

The Mayor’s Award for Excellence in Business has been sponsored by GHDC since 1992 to recognize outstanding businesses and/or individuals in the Huron business community that contribute to the improvement of the community and quality of life for Huron residents in arts and culture, amateur sports, education, voluntary community groups, economic development, and other areas that provide positive impact upon Huron.