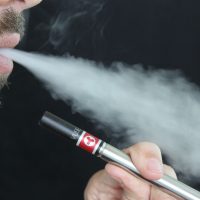 On July 1, the use of e-cigarettes or other vaping products will become illegal in almost all South Dakota workplaces and public buildings, including bars, restaurants and casinos.

After a relatively quick and quiet debate, lawmakers voted in March to treat e-cigarettes the same as combustible tobacco products when used in public buildings and businesses. Gov. Kristi Noem signed the public vaping ban into law on March 27, joining a dozen other states with similar laws.

Backers of the measure claim it will protect the air quality in public spaces and allow non-users to avoid breathing or smelling aerosol clouds from vaping that can contain addictive nicotine or other toxins. They also said the ban will help reverse the growing trend of vaping by children.

But opponents of the ban, including some conservative lawmakers and representatives of the vaping, gaming and beverage industries, say the law infringes on the property rights of business owners and the freedom of adults who legally use vaping products. They argue that e-cigarette vapors dissipate quickly and that the science is incomplete on whether second-hand vapors have the same health impacts as second-hand smoke. Opponents also say the law is unnecessary because many South Dakota businesses already ban vaping on their own.

But concerns over increased youth vaping fueled the positive vote.

From 2017 to 2018, according to the CDC and FDA, e-cigarette use rose by 78 percent among American high school students and by 48 percent among US middle-schoolers.

When the law takes effect on July 1, anyone vaping or using e-cigarettes in public buildings or a workplace could be charged with a petty offense, which is a civil charge that can include a fine.

For more on this story, please go online to sdnewswatch.org