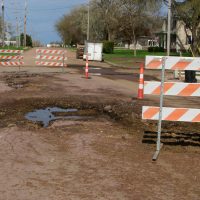 The recent blizzards and rainstorms that devastated rural South Dakota roads have left county governments struggling to pay for repairs.

Many South Dakota counties and townships were already struggling to maintain roads and bridges long before two blizzards struck earlier this year.

Warmer, wetter weather combined with heavier farm traffic and limited resources have left many rural counties struggling to keep up with road maintenance. Flooding from blizzard snow melt and this year’s continued wet weather have led to road and bridge closures and even burn bans in some counties where first responders worried they wouldn’t be able to respond in emergencies.

Data collected by the National Oceanic and Atmospheric Administration show that since 1991 the state has averaged 14 percent more one-inch or greater rain events than it had between 1900 and 1990.

South Dakota is also about two degrees Fahrenheit warmer on average now than it was in 1900, according to NOAA.

Farmers and ranchers, meanwhile, haven’t been able to access their fields and pastures with heavy equipment. Planting has been delayed for many, adding more worry on top of low grain prices.

That’s a big problem for rural areas of the state, whose economies rely on agriculture.

Some local officials say the heavy flooding should prompt fundamental changes to how rural roads are maintained and they are urging lawmakers to provide new ways for rural governments to raise capital.