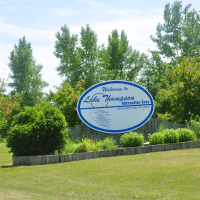 Some residents of Lake Thompson have taken to social media to ask the state of South Dakota to help them with access to their homes on the flooded lake.

In a series of Facebook posts, Kathy Heither of Sioux Falls–who says she is a former resident of Lake Thompson–says residents are parking along roads and on vacant lots because they can’t get to their properties.

Some farms, homes, and trailers sit surrounded by water.

“I think it is a sad day when our State can’t help it’s taxpayers,” Heither writes on her Facebook page. “This area has been under water (sic) with NO ACCESS in to (sic) their homes for more than two months.”

“I know there are friends and relatives of Governor Noem that follow this page and can you pass some of these concerns on to her,” the campground page noted. “They (lake residents) feel like their voices haven’t been heard for several months now.”

The state of South Dakota says they’re working on the problem.

“Access issues like this are common in many areas where it has flooded this year,” said Tony Mangan, a spokesman for the South Dakota Department of Public Safety. “The state is willing to work with the county and affected townships to find a solution to the issue.”

The S.D. Department of Game Fish and Parks lists a couple of areas in and around Lake Thompson that are closed or restricted:

Heavy snowfall and rain last winter and spring are not the only culprits causing problems at Lake Thompson and other glacial lakes.

According to the U.S. Geological Survey, the area’s lakes have been expanding for decades.

“Lake Thompson varies greatly over the years,” Trobec said. “It is very susceptible to droughts and floods.”