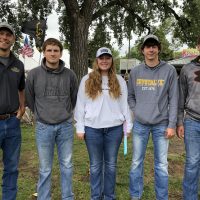 Putting their farm safety knowledge to the test, four South Dakota FFA Chapters competed in the Team Up for Safety Quiz Bowl Championship Saturday, during South Dakota Farmers Union Day at the State Fair in Huron.

“This quiz bowl is a fun way to make youth aware of farm safety and educate them on how to keep themselves and their friends safe,” explains Doug Sombke, SDFU President and fourth-generation Conde farmer. “As an organization, South Dakota Farmers Union (SDFU) is dedicated to supporting family farmers and rural communities. We invest in keeping our rural youth and families safe. Just the simple fact that most farms in South Dakota are family farms, means many South Dakota youth either live on farms or have friends who do.”

According to the Centers for Disease Control and Prevention, an estimated 1 million youth, under the age of 20, live on farms in the U.S. Over half of them do farm-related work. Sombke points out that agriculture is often listed among the most dangerous occupations in America. Farm workers face many risks because of the large machinery they work with, along with chemical hazards, unpredictable livestock and enclosed spaces like grain bins that hold thousands of pounds of grain.

Wolsey-Wessington is one of four teams to qualify for the championship quiz bowl during the South Dakota State FFA Convention held in April on the campus of South Dakota State University. Other qualifying teams include Hoven, Howard and Dells (from Dell Rapids).