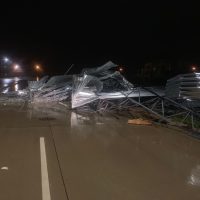 The tornado touched down around 11:40 pm Tuesday near Western Avenue and 85th Street, according to Philip Schumacher, science and operations officer with the National Weather Service.

Xcel Energy reports about 300 outages and 12,000 customers affected from the storm.

There are also outages reported in Dell Rapids, Lennox, Canton, Bridgewater and near the intersection of I-90 and I-29.

The utility did not have an estimated time when power would be restored.

Brett Wulf, general manager of the Advanced Auto Parts store on 41st Street near the Western Mall, said no one was in his store when the storm came through. The building is still standing but the east and north walls were ripped away.

He said there was also a gas leak nearby.

At the Avera Heart Hospital off I-229 and 69th Street, the front doors were wide open and people were cleaning the lobby.

About a block to the west of the Heart Hospital on 69th Street, a pile of twisted metal and other debris covered the road. The parking lot also had metal debris, likely from the roof, as well as downed trees and branches.