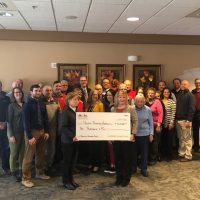 Del Grosso said they will be reaching out to the community as the program grows.

As the newly introduced Huron Housing Rehab Specialist, Ralph Borkowski talks about the next step in the process.

Borkowski talks about what his primary duties will involve.

The Huron Community Foundation also received a check for $12,500 from the South Dakota Community Foundation in recognition of passing the $100,000 mark in their $200,000 capital campaign to assist in completing Huron improvement projects identified by Huron Rising last year.