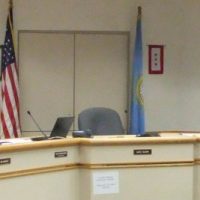 The Huron City Commission met Monday night in their regular session.  Mayor Paul Aylward paused to give condolences from the City employees and commission to the family of Phil Mccaskill,  the Huron street superintendent passed away over the weekend.  Bob Simpson was assigned as acting city street superintendent.  In other business Commissioner Kludt announced that the city rubble site will be closed this Saturday and Monday for observance of memorial day.  Monday’s route for garbage, grass container and recycling will be collected on Wednesday next week.  In other department items a new company bid was approved in the continuing Manhold lining project, Redline Construction of Glen Ellyn Illinois was awarded the bid.  A mill and overlay project bid was recommended to be rejected as assistant city engineer Dennis Bennett advised.  Due to the bid exceeding the city budget for the project they concurred with the golf department that rejecting the bid was in the best interest of the city.  To preserve the parking lot the alternative plan is to help preserve and extend the surface of the parking lot using city employees to chip seal the lot at Broadland Creek.  Bennett said it is anticipated that the pavement life would be extended 5-7 years.  Parks and Recreation director Laron Klock presented an annual grant request to be submitted to the SD Department of Health for mosquito control with West Nile Virus.  The met in executive session to discuss opening of city controlled buildings.  The city also approved a parade request from Huron Strong/ Laurie Shelton for a graduation parade Sunday May 24 along Dakota ave in huron.  That will be at 4pm.  Their next regular meeting will be Monday June 1st.