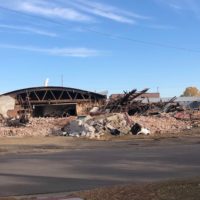 A long standing landmark at 50 Colorado avenue in Huron was demolished Tuesday.  The Huron city shop last used in November of 2018 was carefully taken apart and removed.  The building was home to Huron city departments including street, garbage and water sewer.  When the garbage department moved out the traffic department moved into the structure from their previous location in the old city hall.  Water and sewer department later moved to a location on market street which previously housed Ellwein Distributing.   The city was not the first owner of the building.  Standard Oil once owned the entire expanded block area between Colorado and Nebraska Avenues and Market and First street.  The north portion of the property is now Federal Surplus.  The maintenance building sustained damage from a fire in 1967 or 68.  The departments that used it last moved to the new city building in Huron’s west industrial park in 2018.  Years of deterioration and projected costly repairs forced its demise.