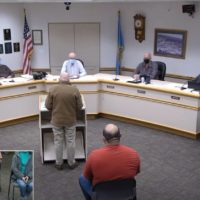 The Huron City Commission met for their weekly session Monday night, the main issue on the agenda brought out a good representation for the public forum at the beginning of the session.  With Covid 19 numbers near 600 the commission has been tasked with what they can do to help redirect the curve downward.  Cliff Hadley spoke on his feelings of a mandatory mask mandate.

The majority of those in attendance were against the mask mandate, including Huron resident Sarah Rogers.

Commissioner Bryan Smith spoke of the strong feeling against the mandate from attendees at the meeting but expressed what his vote will come down to.

Although the resolution will not be backed by any fine.  Commissioner Doug Kludt felt it was the best they could do right now.

The vote passed unanimously 5-0 and as a resolution will go into effect immediately in the city of Huron.  Mayor Gary Harrington said the Beadle County Commission will address the same issue on Tuesday.