Glanzer was a high school teacher and coach before becoming the manager of the South Dakota State Fair in 1975. He went on to a successful banking career, retiring in 2012.

In 2016 Glanzer was elected to the South Dakota House, a public service seat he held at the time of his death on April 3, 2020 at 74 from COVID-19 complications,

Sen. Glanzer worked quietly in the background for community and economic development in the Huron-area, but was willing to accelerate his efforts and visibility when needed, noted NorthWestern Energy CEO Bob Rowe.

“We are proud to be a part of South Dakota, and to invest in the critical infrastructure that will meet South Dakota’s needs for many decades to come,” said Rowe. “We couldn’t do this without an exceptional partnership with South Dakota and with communities, including Huron. Bob Glanzer exemplified the spirit of partnership and getting good work done that makes South Dakota successful. It is fitting that the Bob Glanzer Generating Station is a flexible capacity resource that will provide energy as needed 24/7 for NorthWestern Energy’s South Dakota customers for many decades. That reliable, affordable energy is an important economic development tool, one that Sen. Glanzer recognized.” 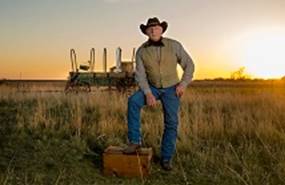 “Dad owned about 9 acres near the plant where he had horses, a roping arena and entertained many people with his team of horses and his restored chuckwagon and just did his cowboy thing,” said Tom Glanzer. “It’s a fitting spot that will see economic growth for years to come and an honor to recognize what he did for the community he loved.”

Commercial operation of the Bob Glanzer Generating Station is scheduled for the end of 2021.