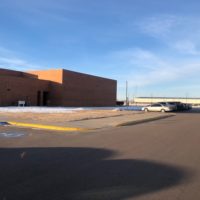 The Building trades program at Huron High School has had a planned expansion that had originally been a part of the High School renovation completed at the start of the school year.  Jolene Konechne Career and Technical Education Center Director brought in the Director of Buildings and grounds for the district John Halbkat and Matt Busch Building Trades instructor to talk about the plans for the CTE addition.  When completed it will allow the building trades students to learn home building in an indoor facility.  Busch talks about the benefits of the plans.

The Career and Technical Education building was original known as the Vocational Technical building.  Busch talks about the square footage of house that they would build indoors in the planned CTE addition. 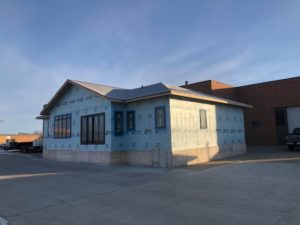 Photo: Current building trades home being completed on the west side of the CTE building.

The addition would be to the north of the CTE and occupy space south of the middle school bus drop off zone.  The area currently is overflow parking.  Halbkat talks about what the planned addition will look like.

The money to pay for the addition is funded in part through grant money to the district that has a Covid Extension that will allow it to be used for the project.  The grant comes with the district opening up use of the building trades addition to area schools for similar summer programs.  Halbkatt said they hope to get bids in this summer.  To prepare for the design of the building, Halbkat and Busch took tours of facilities at Yankton High School and Mitchell Technical College.