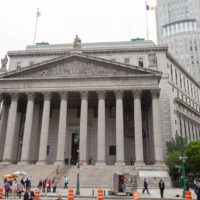 The Trump Organization’s chief financial officer, Allen Weisselberg, and lawyers for the company appeared in front of a Manhattan judge Thursday, pleading not guilty to charges in what prosecutors called a sweeping tax fraud scheme. The charges were unsealed after former President Donald Trump’s longtime aide and the company were indicted by the Manhattan District Attorney and Attorney General Letitia James. Weisselberg entered the courtroom in handcuffs and entered the not guilty plea on charges related to alleged failure to pay taxes on corporate benefits and perks. Moments before Weisselberg pleaded not guilty to grand larceny, lawyers on behalf of the Trump Organization pleaded not guilty to charges of scheme to defraud.

The 15-count indictment alleges Weisselberg and the Trump Organization cheated New York State and New York City out of taxes by conspiring to pay senior executives off the books from 2005 through this year. Prosecutors allege Weisselberg evaded taxes on $1.7 million in income that included apartment rent, car payments and school tuition. Weisselberg’s estranged, former daughter-in-law turned over several boxes of documents from her divorce to prosecutors. She claimed they show financial transactions from Weisselberg to her family for rent, cars and private school tuition.

Weisselberg, an employee of 48 years, operated as CFO of the Trump Organization as well as the Trump family’s personal bookkeeper. He also appeared on Trump’s reality show “The Apprentice.” Trump himself was not charged, but he isn’t in the clear. The grand jury will be sitting in November, so it’s possible he could still see indictments. The former president did say his company’s actions were “standard practice” and “in no way a crime.”