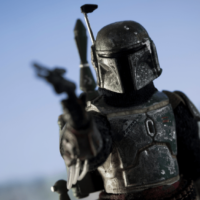 The latest Star Wars series The Book of Boba Fett will be coming to Disney+ on Dec. 29. The official Star Wars Twitter page made the announcement alongside a new poster featuring the titular bounty hunter sitting on a throne with a blaster in his hand.

The Book of Boba Fett was teased during an after-credits scene that appeared at the end of The Mandalorian Season 2 in December 2020. Fett, portrayed by Temuera Morrison, returned to Jabba the Hutt’s palace and shot up the place before taking Jabba’s throne during the after-credits scene. Mercenary Fennec Shand, portrayed by Ming-Na Wen, will be joining Fett in the new series.